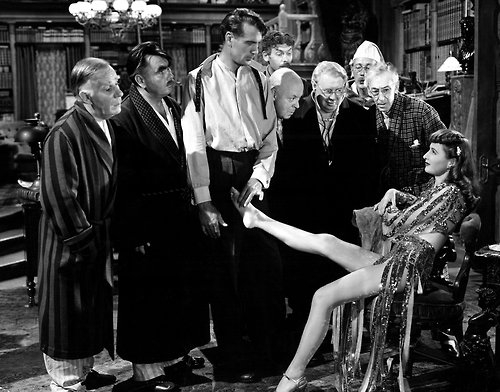 The Historic Film Club at the Northwest Montana History Museum returns for a new year of classic cinema on Tuesday, January 26, with the 1941 comedy Ball of Fire!

Eight of the most intelligent professors in New York City have been holed up in an apartment for years in an attempt to create an encyclopedia of all human knowledge. What’s missing? The sort of common vernacular that is outside of academia. So Professor Bertram Potts (Gary Cooper) ventures out to look for a test subject to study, and Katherine "Sugarpuss" O'Shea (Barbara Stanwyck) provides - and then some.

A modern-day telling of "Snow White and the Seven Dwarfs", Ball of Fire was so well-received in 1941 that the plot was recycled by the same director just seven years later into the Danny Kaye musical A Song is Born. Screenwriter Billy Wilder was heavily involved in the films production and considered it a "test run" of sorts for his later film Some Like it Hot starring Marylin Monroe.
Advertisement
Age Group: All Ages