This event has already taken place! Please make sure you are in the correct year. ×
Jun
12
Saturday
Jun
12
Sat 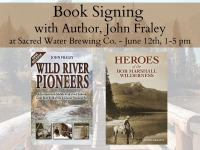 About the Event:
Sacred Water Brewing Co.'s Summer Kick-off Party welcomes summer and sunshine vibes with new beer to share with you, local vendors (like author John Fraley, the Bob Marshall Wilderness Foundation, and Trout Unlimited), live music, and backyard games. Join the party from 1-5 pm to visit with the vendors and author John Fraley (get your book signed and visit about the numerous stories his books tell) and then stick around later for live music starting at 5:30 pm.
Click here to see more event details: https://www.facebook.com/events/382042696468035

About the Books:
Wild River Pioneers - Author John Fraley (Heroes of the Bob Marshall Wilderness; A Woman’s Way West; Rangers, Trappers, and Trailblazers) knows the Middle Fork of the Flathead River and its stories as well as anyone. Wild River Pioneers is his collection of true tales about shootouts, grizzly bear attacks, a murder (and a hanging), secret caves, fortunes won and lost, a wily Josephine Doody bootlegging in Glacier National Park, and an ice cream–eating pet bear, and more.

Heroes of the Bob Marshall Wilderness - is a look into the adventurous men and women who have worked and played in Montana’s largest designated wilderness. A living legend in his own right, author John Fraley tasked himself with collecting the tales of the heroes both past and present, from Joe Murphy’s trail rides in the 1920s to rangers raising their young kids each deep in the Bob today. Fraley’s passion for the land and the people shows on each page.


About the Author:
John Fraley came to Montana as a teenager to attend the University of Montana, where he received a B.S. in Wildlife Biology. He continued his education at Montana State University and received an M.S. in Fish and Wildlife Management.
John worked for the state wildlife agency for nearly forty years, mostly in the forks of the Flathead River. He retired in 2017. For thirty-four years he has also served as an adjunct instructor at Flathead Valley Community College, where he teaches wildlife conservation and other courses. John has written numerous magazine articles on the history of the Flathead country. His other books include Rangers, Trappers, and Trailblazers; A Woman’s Way West; and Heroes of the Bob Marshall Wilderness. John’s wife, Dana, and children, Kevin, Heather, and Troy, share with him a love of wandering around the backcountry of the three forks of the Flathead River.
Get Tickets
Advertisement
Age Group: All Ages