This event has already taken place! Please make sure you are in the correct year. ×
Apr
27
Tuesday
Apr
27
Tue 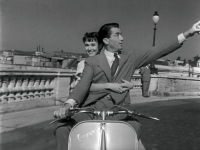 Joe Bradley (Gregory Peck) is an opportunistic expatriate reporter who is always looking for the next big scoop. So when he spots Ann (Audrey Hepburn), a European princess who had fallen asleep on a bench due to sedatives, he doesn’t just see the princess - he sees dollar signs. However, while touring around Rome with Ann to capture candid and exclusive images, Joe begins to fall for the princess, trading his avarice for a newfound affection.

Roman Holiday marked the first major film role (as well as the first American film role) for star Audrey Hepburn. Though Hepburn was the third choice for the role, you could say that the casting was a success - Hepburn won an Oscar for her efforts at the 26th Academy Awards.

TO ADDRESS COVID 19 - We are taking several precautions to make sure that a Museum visit during these uncertain times will not adversely effect the health of our visitors:
All public fixtures in the Museum (hand rails, door knobs, bathroom components, interactive exhibits) will be regularly and repeatedly sanitized on a daily basis
Facemasks are highly encouraged when social-distancing is not possible.
To further promote social-distancing, seats in the Swanburg Classroom will be spaced apart at six foot intervals.

Of course, everyone is always welcome at the Northwest Montana History Museum. However, if you have a cough, a fever, or are just feeling under the weather, we kindly ask that you visit us some other time; not only for your own health, but for the well-being of our staff and other supporters.

There is no charge for the film, and donations will be accepted to help defray the cost of showing the films. The movie and popcorn are free; wine, beer, pop and water will be for sale. Seating is provided, but film fans can bring their own floor pillows, portable chairs, or whatever is comfortable for viewing the film.
Advertisement
Links: http://www.yourmuseum.org/